Brand Portfolio Strategy: Can HOG and Ducati Live Happily Ever After? 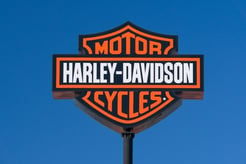 Rumor has it that American iconic motorcycle maker Harley-Davidson might be looking to court Italian rival Ducati in the not-so-distant future. The potential $1.67 billion deal would bring together two of the most famous brands in motorcycling.

Harley-Davidson (HOG), which enjoys about half of the U.S. big-bike market share, was founded in Milwaukee, Wisconsin, over 120 years ago. Harley was one of two major U.S motorcycle manufacturers to survive the great depression and also recovered nicely following the recession when bike shipments less than halved in 2010 from their 2006 peaks.

The noisy brutish Harley bikes were highly popular with the Baby Boomer generation, which formed its biggest customer base. However, this segment is aging, and the iconic manufacturer is struggling to replace its core customer base.

Targeting a New Customer Base

Harley’s growth strategy includes growing the company by appealing to new segments which haven’t traditionally been attracted to the Harley-Davidson brand or motorcycling in general (e.g. create products that appeal to women, minorities, young people, and anyone who doesn’t fit into the typical older white male demographic).

The problem is that today’s young consumers don’t have nearly as much discretionary income as their baby boomer parents when they were younger. Millennials are typically more price-conscious (especially after the recession) and tend to put off discretionary expenditures, which include luxury heavyweight motorcycles. So, the challenge for Harley is not just to fend off competition but also to grow in a slowing market.

A Match Made in Heaven?

According to the buzz, HOG is seriously considering a bid for Italy’s Ducati brand (owned by Volkswagen AG). Volkswagen faces pressure to consider unloading Ducati as it continues its strategic refocusing in the wake of Dieselgate. Both brands have intensely loyal owners and fans and sell at least in part on nostalgia, making the Ducati brand a stellar addition to the Harley-Davidson balance sheet.

Although the companies are two of the oldest and most iconic brands in biking, they couldn’t be more dissimilar. Both companies make motorcycles, but the brands appeal to distinct market segments and have different positions in the market. Ducati is considered the “epitome of elegant engineering and sophisticated styling”—the Ferrari of sports bikes.

It's a Long Way from Milwaukee to Bologna

Harley-Davidson is not known for reliability in the U.S. They are jokingly referred to as “a marketing company that happens to sell bikes” and, arguably, Ducati is a company that sells bikes so it can race. As Harley’s key demographic begins to ride off into the sunset, Ducati’s prize-winning bikes are awe inspiring and something to work towards in the eyes of millennials.

Should the deal happen, Harley ought to keep the Ducati brand separate and not rebrand the bikes under the Milwaukee company’s name. Although both companies have well-established fan groups that view cycling as a lifestyle, you are not going to mix a Harley owners group with a Ducati owners group. They’re totally different worlds, and any overt linkage would likely result in confusion among consumers and dilute both brands' hard-earned equity.

Ducati has a rich racing history and a reputation for refined technical advancements, while Harleys are known for neither of those things. Its bikes reflect a more aggressive, in-your-face attitude, with designs that shun smooth handling and state-of-the-art engineering innovations.

The ultimate fear of Ducati fans is that Harley-Davidson will raid the brand’s engineering and design talent to boost its own brand, as is frequently the case, via post-acquisition assimilation. Harley will need to ensure that the talent, magic and "secret sauce" responsible for building the Ducati brand is not lost.

Ensuring a sound, specific, and attainable brand portfolio strategy is imperative to growing a business. Ducati’s addition to Harley’s brand portfolio would make sense in addressing its aging, loyal baby-boomer base, lack of interest in motorcycling by millennials, and slower sales and increased competition in the U.S. and abroad.

Harley focusses on classic and touring bikes while Ducati is known for performance bikes, so the deal makes sense. If the rumor is true, then Harley-Davidson will have a brand that appeals to a market previously untapped by them (unlike their unfortunate decision to purchase MV Agusta in 2008). This way Harley keeps its usual fans and can develop a whole new group of serious enthusiasts. Time will tell.