Why Is It So Important for Brands to Differentiate? 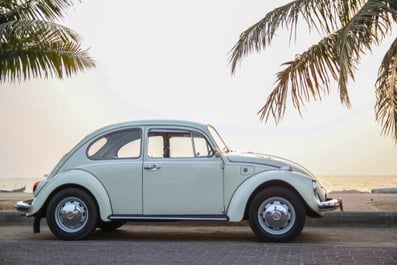 Today’s winning brands can’t afford to play it safe. They don’t say "that's just how it’s always been done," and they understand that their brands are more just a sleek logo or a cool tagline. The brands that crush their competition understand that branding and brand strategy go much deeper than attractive website design and responsive mobile design.

Our brand strategy consultants are all too aware that there are many weak brands and ho-hum average brands in the marketplace. There are even many strong brands in the world, which other companies aspire to emulate. However, few brands ever develop a deep, lasting relationship with their customers. Few brands genuinely differentiate to win customers’ hearts, which breeds authentic customer loyalty. Even fewer brands achieve iconic status.

The Young & Rubicam Brand Asset Valuator Model is comprised of more than 350,000 consumer interviews conducted across the globe and measures more than 55 different consumer perceptions regarding 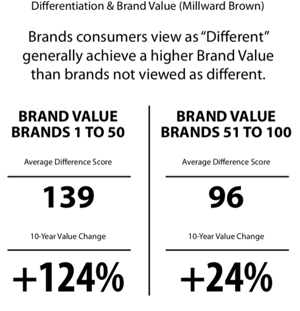 more than 20,000 brands. It proposes that four measures (pillars)—differentiation, relevance, esteem, and knowledge—are consistently linked to a brand’s ability to deliver revenue and profit, regardless of category, country, or the age of the brand. Regarding the Differentiation pillar, Y&R said this:

“The critical pillar is the first one, Differentiation, which represents the distinctiveness of the brand. To have a chance in today’s marketing world, a brand must be perceived as different and unique. It must be seen as possessing a distinctive persona with a meaning all its own. While Differentiation, in general, is very strong among the successful brands, it is usually the first pillar to dissipate for those going bankrupt.”

After roughly seven decades of production and three generations of designs, the last Volkswagen Beetle, a third-generation Denim Blue coupe, was produced in Puebla, Mexico. The Volkswagen Beetle is one of the longest production cars ever built, with the same original design staying in production until 2003 in Mexico. It is the best-selling car in the history of the automotive world. Designed in the 1930s, during World War II, civilian Beetles began to be produced in significant numbers by the end of the 1940s. The original Beetle continued in production for 58 years.

The VW Beetle was more than just a unique choice; it was a one of a kind car that offered many innovative features that differentiated it from the crowd of similar vehicles that were on the market. Although many things made the original Beetle such a unique car, the main reason was likely the fact that its rear seated engine was air cooled instead of utilizing a traditional radiator and coolant tank. This differentiated the Beetle from other cars that were on the market at the time.

From its one of a kind styling to the unusual placement of the engine, the Beetle will be recorded in history as a unique car that defined an era. The Beetle definitely defined the company that is Volkswagen today and shaped the face of the automotive industry positively, with an innovative design difficult to match.

According to Scott Keogh, President, and CEO, Volkswagen Group of America, “From its first import in 1949 to today’s retro-inspired design, it has showcased our company’s ability to fit round pegs into square holes of the automotive industry. While its time has come, the role it has played in the evolution of our brand will be forever cherished.” Volkswagen used good design and told a story that differentiated the Beetle from a crowded slew of similar cars.